Top Things to do in Nimes

You are here: Home / Destinations / Nimes / Top Things to do in Nimes

We’ve visited Nimes on several occasions and absolutely love this city. The town is located in the Gard department around 30 minutes from Montpellier. Known as the Rome of France, Nimes has some very special ties with the Roman era. Originally designed as place of retirement for legionnaires serving under the orders of Julius Caesar, you’ll find many ancient 2000 year old Roman monuments which will blow you away.

Les Arènes de Nimes is hard to miss! It’s one of the best preserved Roman amphitheatre’s in the world and dates back almost 2000 years. It was built between the end of the 1st and 2nd century AD at a time when Romans had reached high levels of architectural, building and design perfection. It measures an impressive 133m long and could seat up to 24’000 spectators.

Various shows take place there including concerts and the famous Roman event ‘Les Grands Jeux Romains’. You’ll get an audioguide and if you’re visiting with children, be sure to ask for their little quiz as this will keep the kids entertained. Be sure to check out the gladiators’ quarters where you’ll be able to see their equipment and weapons as well as a short film.

>> Top tip: we recommend you buy a “Pass Romain” which will give you entry to four sites (Arènes de Nimes + Maison Carrée + Tour Magne + Théatre Antique d’Orange). You’ll get a reduced rate and the ticket is valid for a month so you can take your time getting round the 4 sites. <<

This incredible structure will take you by surprise. You could be fooled into thinking you’d been teleported to Rome! It’s hard to believe that it was built some 2000 years ago and is one of the best preserved Roman temples in the world. There are some beautiful carvings that are said to have been inspired by that of the Mars Ultor temple in Rome. Unlike in the past, when entry to the temple was reserved to priests, you can visit the inside of the Maison Carrée. You’ll watch a film that describes the birth of the town of Nimes ‘Nemausaus – The Birth of Nimes”.

You may also spot an area of roman ruins in front of the Maison Carrée. These were discovered during excavation work in the 1990s and are believed to be remains of a residential area that predates the forum, dating back to the 1st century BC!

Directly opposite the Maison Carrée and in stark contrast with the Roman design, you’ll find a modern contemporary building. This is the Carré d’Art, a modern art centre, designed by British architect Norman Foster. It houses modern art as well as the public library. 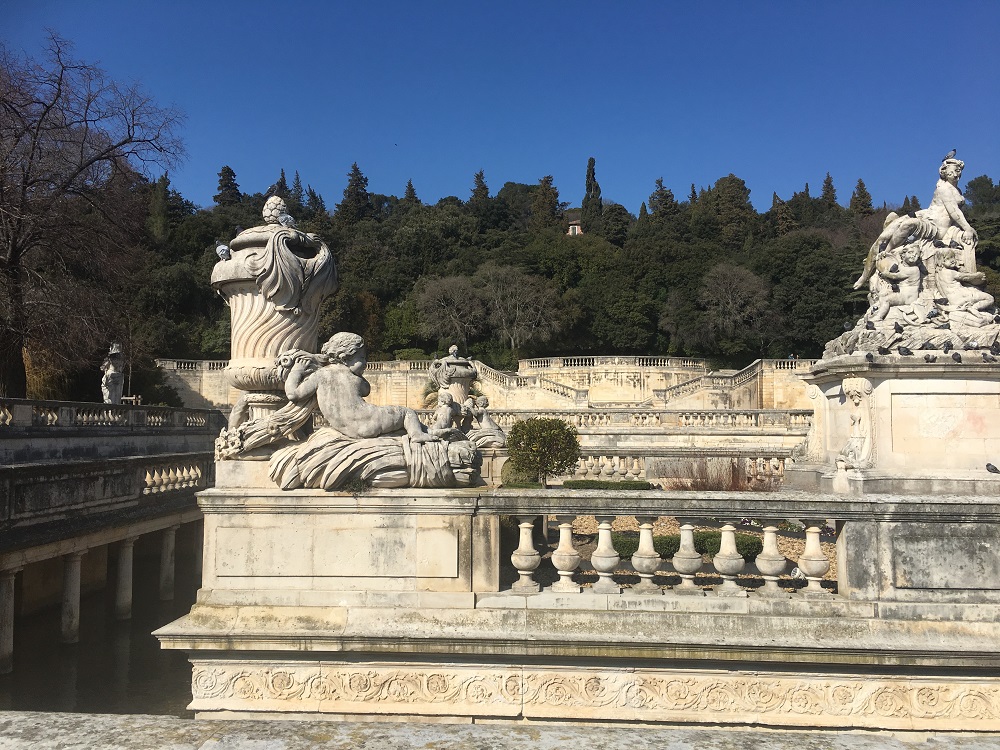 In the heart of Nimes, these elaborate gardens cover an impressive 15 hectares. Created in the 1745 for the king of France, no expense was spared with beautiful terraces lined with ornate stone balustrades and topped with classical statues.

The site was once an important Roman bath complex. Water in the form of a lakes, streams and fountains dominate the main design. In the shady nooks, unusual species of trees provide protection from the intense sunlight while well-tended flower beds provide colour and drama. It’s fun to explore the park using the network of gravel paths that, you never know what surprise lurks around the corner, a Roman temple perhaps?

This is now a park for the people of Nimes to enjoy and when we visited there was a small fun fair operating in the main promenade. Children could hire go carts and pony rides were available. It feels like that this is an oasis where the town’s residents come to relax and watch the world go by on a sunny Sunday afternoon. 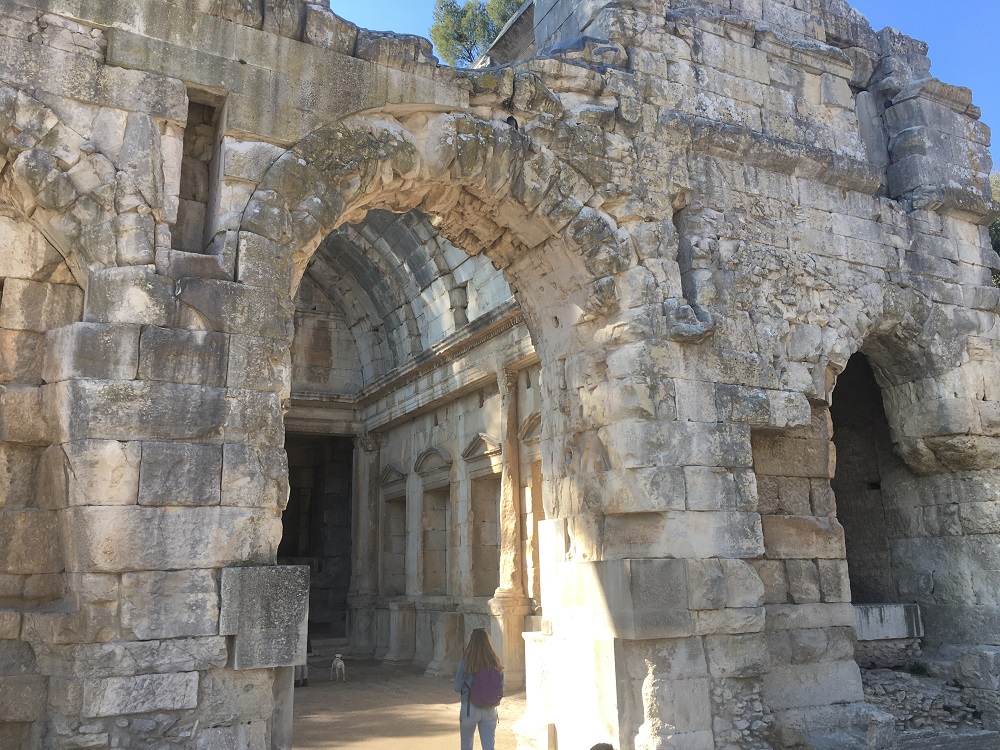 Located within the fabulous Jardins des Fontaines and next to the water gardens, are the evocative ruins of the Temple of Diane, built by the Romans during the reign of Emperor Augustus. Although small, be prepared to be impressed by some brilliantly detailed stone carvings and classical architecture. It’s easy to imagine this place in all its glory.

Historians believe that this imposing building was once used a library because of the surviving stone niches. Due to the wealth of Roman artefacts in this part of France, unbelievably, there is no entrance fee or barriers, so it’s possible to wander where you choose.

The ancient Roman tower of Tour Magne was built around 15 BC and was the tallest of the 80 towers that once stood on this site. These towers formed part of the defensive city wall which stretched an amazing 7km in total!

Although the tower is now partially ruined, it’s still impressive from the outside, and if you pay a small charge, the inside as well. Once through the turnstile, you can view part of the original Gallic dry stone tower, which the Romans built their structure around. A modern steel spiral staircase has been constructed to allow visitors to climb to the top and enjoy a spectacular view of Nimes and beyond. It is 36 metres high so you need a good head for heights.

The Tour Magne is located at the far end of the Jardins des Fontaines, although quite far and uphill towards the end, it’s a pleasurable stroll through this gorgeous park.

This is Roman plumbing at its best! Le Castellum is essentially a device that the Romans used to divert and control the fresh water coming into the city of Nimes from the nearby Pont du Gard aqueduct. It allowed them to close or open certain water pipelines into various parts of the city. So, for example, if there was a water shortage, then the poorer areas would be naturally cut off first.

Anywhere else in the world, there would probably be visitor centre for this rather interesting piece of Roman engineering… instead, hidden down a back street in a residential area, are some unassuming iron railings with an unlocked gate. If you open the gate, you are free explore this complex ancient water control system, although in the interest of preservation, I recommend viewing from the outside only. At the time of our visit there was only small plaque providing a little information for this fascinating site. 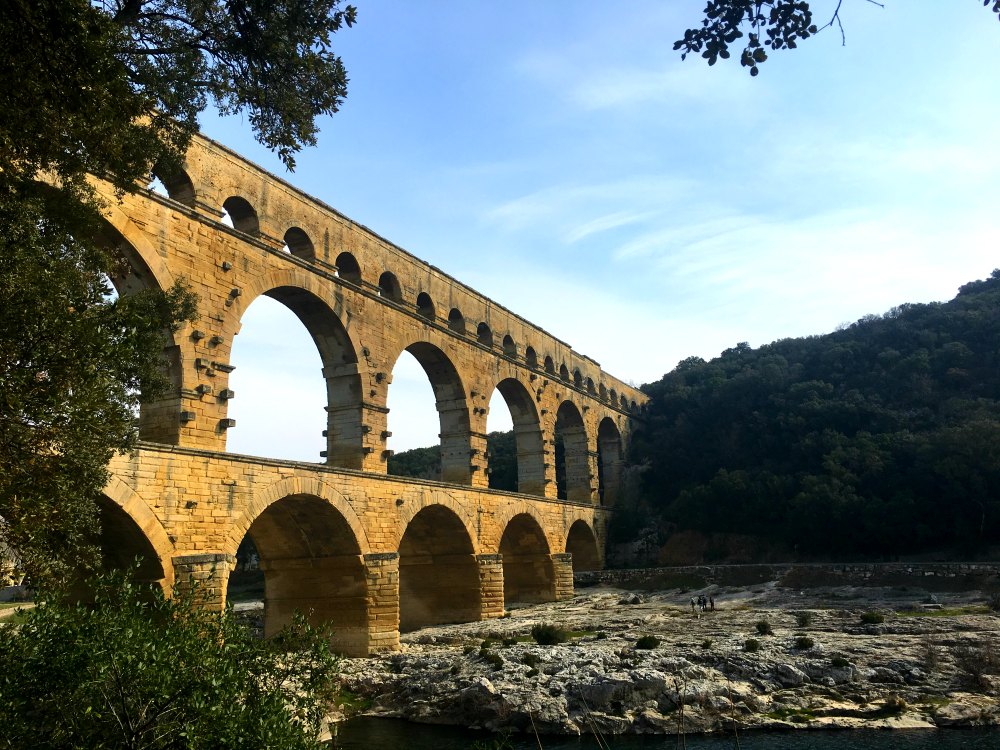 Okay, this isn’t technically in Nimes, however, it’s an absolute must if you’re staying in the area. Le Pont du Gard is located a short 30 minute drive away and is a real bucket list experience. This amazing feat of engineering was built by the Romans some 2000 years ago and was listed as a UNESCO World Heritage Site in 1985. This Roman aqueduct was built to bring water from the town of Uzès to the city of Nimes. It’s constructed as a three tiers archways and many years ago, cars used to be allowed to drive across it! This is now no longer the case and access is only permitted to paying visitors who can walk from one side to the other (on the first level of the aqueduct). Entrance includes parking, access to the aqueduct, the museum (+film) and outdoor discovery area. The area gets very busy in the summer time, however, the riverside is a lovely spot to relax and have a paddle – especially if you’re travelling with kids.

Fun fact: Le Pont du Gard is as wide as 3 jumbo jets, as tall as the Statue of Liberty and features on the 5 euro note!

>> Opening times vary depending on the time of year. Buy your tickets online for a small reduction, under-18s are free. Check the official website for further details. << 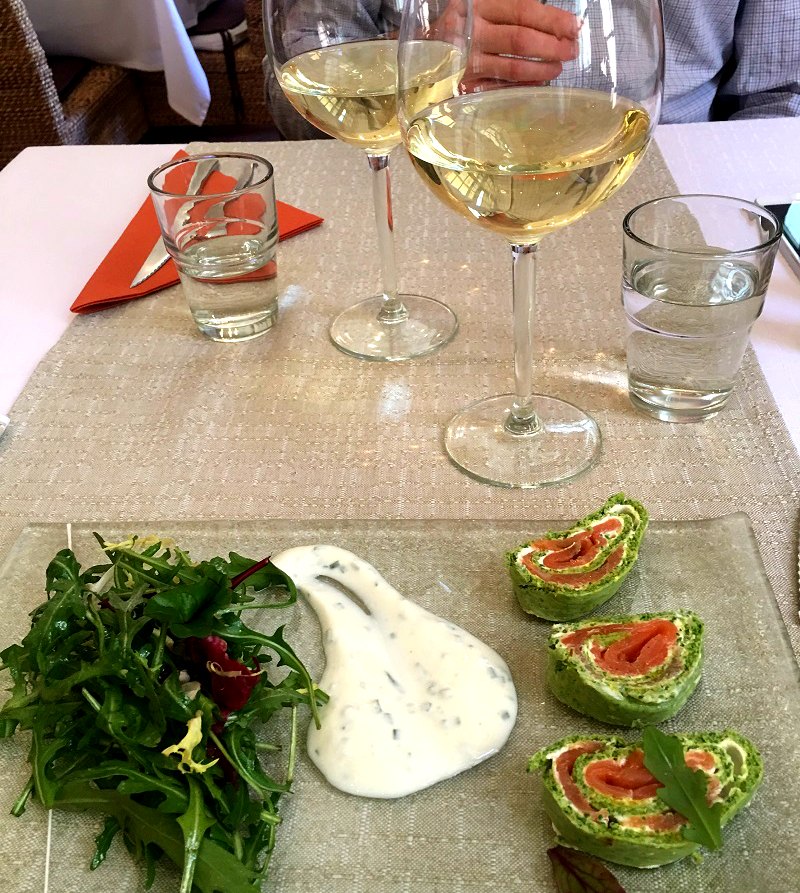 Our accommodation recommended Au Flan Coco and we weren’t disappointed! Located in the heart of Nimes in a former convent Le Couvent des Ursulines, this restaurant serves up delicious, fresh, seasonal fayre. Try their brandade de morue as it’s the city’s speciality! It’s a popular place so be sure to reserve in advance.

We stayed in the Apart City Confort Arènes, with a great view of the Roman Arena – it’s spectacular when lit up at night. The classic hotel building has been beautifully renovated to provide spacious rooms with a luxury feel. Parking is conveniently available under the nearby square.

By car: Nimes is very easily accessible by car with plenty of parking options within the town.

By train: the train station is very close to Nimes town centre and is a great option if you aren’t travelling by car. The centre of Nimes is very compact and all the main sites can easily be reached on foot. You can even catch the TGV from Paris and reach Nimes in under 3 hours.

By bus: there are many bus links from various large cities to Nimes.

By aeroplane: Nimes has its very own airport although it’s a small one – you fly from London (Luton and Stansted) to Nimes with Ryanair. Alternatively, you can fly into nearby Montpellier, Avignon or Marseille where you’ll find greater flight options.

You may be interested in these posts from the same category.

10 Top Things to do in Monaco
Next Post: French Apéro Cake